seriously! did you think I would go away and forget about aRt? the colors in the caribbean are so beautiful. the houses we saw were covered in a buffet of bright blues, green, yellows and reds. all distressed from age and the air and so amazing. we were your non typical tourists in a sense that we took pictures of the weirdest things. benches, sidewalks, doors, dogs and food. I took pictures of everything that inspired me. we had two cameras and would often take the same shot to then compare once we got home. I love digital photography! you can take a billion photos! awesome!
we were walking along the beach one day and came across this row of shops. on the beach! lucky for us there were no signs that said "no shirt, no shoes, no service" cause we didn't have either. lol! there was your usual mass produced tees and keychains, but we were after something unique. we always try to pick up a little something for the house.
we came upon this guy and he told us his name was "scooby doo". yeah, right! anyway I was admiring these plates that he had and he pulled some down for me to look at and started explaining the story behind them. he told us that the plate was "taino art" and that the taino were the dominant culture in the dominican before columbus arrived. he explained how the plates were made and I asked him if he made them, no. I love to talk the actual artist who made the item every chance I get. here is a pic of the plate we purchased: 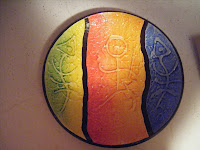 love the colors! and he was delightful too: 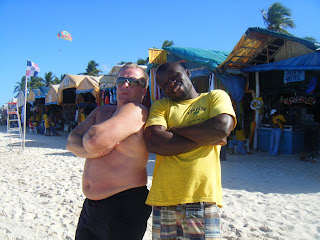 in the same row of shops we also saw rows upon rows of paintings. I asked our buddy "scooby doo" if there was one artist who painted all of them. a lot of the paintings looked the same everywhere we went. he explained that a lot of them were done on computer with color added later, but there were some that are original paintings. we walked around trying to figure out which ones were computer copied and which were originals and I could hear music. not a radio, but someone playing keyboard. we kept walking to the very back and came upon these two: 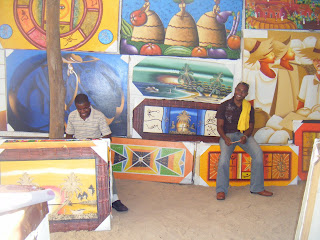 they stopped playing as soon as they saw us and I said keep going, keep going. they laughed and the one playing said he wasn't very good and I told him he was doing just fine. it reminded me of when dan is singing and playing in the basement. I loved it!
on the resort they had a little stand set up where you could pick a piece of pottery and paint it and of course I had to do that! the man who worked there was from haiti and we chatted him up while I was painting away. he told us how he came to the dominican in hopes to make more money. he would talk to the tourists and try to pick up other languages. we overheard him talking to someone in german and he spoke very good english. his dream was to one day be a tour guide. one of the things we did learn was that the dominican government does not assist students so that they can attend university. the people with the money go to university. he told us about his uncle in canada who was trying to get him to go there and had a job waiting for him. we told him it could be a bit cold for him! 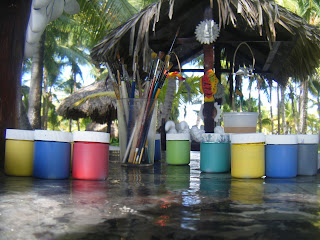 an outdoor studio! imagine that!

the entrance of the restaurant had an archway made of palm leaves and they had food carvings. very kewl! 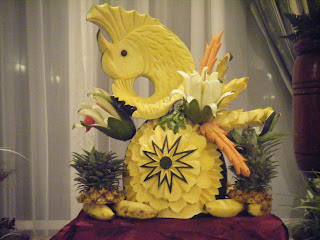 also on the resort they offered henna tattoo. of course I indulged! lol! 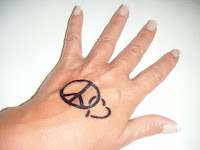 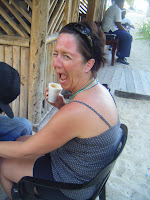 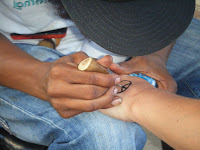 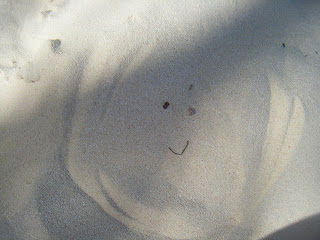 I was about to lay back down and saw it in the sand smiling back at me.  how fun to find "aRt" in other countries.

thank you for all your comments. I loved reading them!
Posted by nadia at 20.11.08

Thank you for sharing this wonderful trip! What a beautiful place.

cool and interesting photos, a great way to see where you were - thanks for sharing about it...I want to go now!