in the studio today...

this was certainly not the plan for today but the "idea porch" works in mysterious ways.  whilst out on the porch this snowy, grey, cold morning my thoughts wandered to this canvas.  it has been sitting around waiting for something for quite awhile. 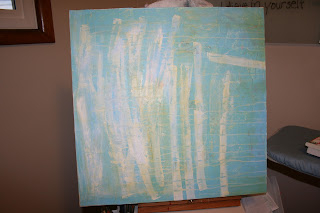 according to the photos I dug up this piece began in the old house.  which would be circa 2010.  apparently whatever was once a beginning was in the process of being covered up. 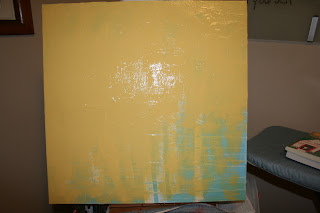 I am assuming that I picked the blue and yellow because those were going to be our colours for the new place. 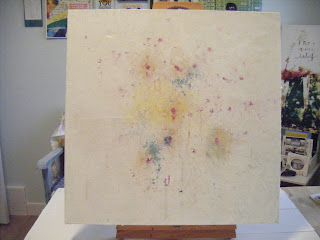 and somewhere along the line I decided that the yellow stunk and covered it up with white and then did some doodling, speckling and who knows what else.  I do recall finding a quote that I wanted to incorporate into the piece and set it aside for - later. 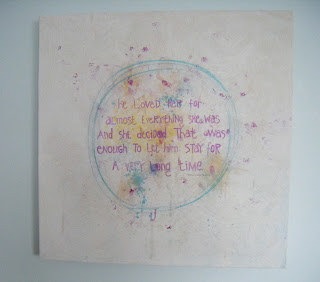 the "idea porch" was telling me to dig out that piece right now and get the letters on there.  the other day the man asked if I had any finished art work to hang on our still bare walls.  uh, nope!  so maybe that was in the back of my mind.  not sure but I pulled the quote out from the back of the frame and lettered it on.  I used watercolour to fill in the letters and declared it done. 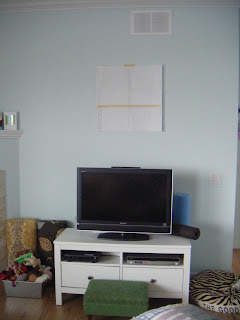 then I pieced some scrap paper together to see how it would look above the tv.  hmmm....what do you think? it's an odd wall with the fireplace and mantle to the left and that ugly black box in the middle. 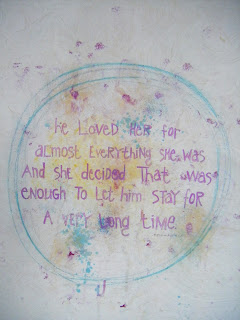 I took another look at the piece that I declared done and thought that maybe it needed something else?  I am tempted to take some sandpaper to it and see what I can uncover underneath!  oh dear!  just when we think we have ticked something off from long ago we still question its completion.  then again I can always splash some gesso on it and voila - blank canvas!

well, we all know how terrifying the blank canvas can be!  gawd!  whatcha working on in your studio today?