yesterday was quite a day. what happened at ma and pa's house is something that in all of my life has NEVER happened.
ma had one wish for her birthday. she wanted to bring treats to her day program to share. kind of like a kid in school. so cute. I suggested cupcakes as that way no one had to worry about cutting cake and you could measure out portions easily. little did I know what I was getting myself into. 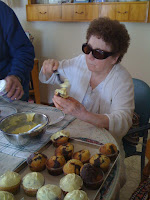 first off you must know that ma likes to watch daily mass at 10 am. so while she was praying up a storm I was busy in the kitchen mixing and baking. dad went to check on her to see if she was ready to come upstairs and after both of them were gone for awhile I went and checked on them.
I interrupted them watching maury and was "ssshhed" so that we could all find out whether or not the man was the father to the woman's three children. turns out the first two were his and the last one was not at which point my father calls her a "putana". ah yes! I could not believe that they were wasting living moments on this, but was impressed by what maury said about loving his non-biological children as much as his biological children so I guess I got something out of it too. 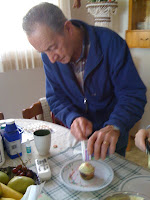 so we get mom back upstairs where the cupcake factory is in full swing and she wants the tv on because it is now time for the price is right. shoot me now! I humor her for awhile and then set up the cupcake decorating station for her at the table. I scold her for licking her fingers while decorating and then decide I am not the one eating the cupcakes so go for it! it felt like I was working with children. dad is running around swearing about the mess of icing and then I pull out the sprinkles. well! more swearing, but then apparently the poor helpless females that we were needed help and so he decided to become the "sprinkle master". so there we were the three of us doing the unheard of in our house. three of us working together on a common goal. to fulfill mom's wish of treats for her group. 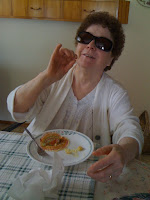 I pulled out my camera quick because I knew this was a memory that needed to be documented. as a child I was either with my dad working in his shop building stuff or off with my friends. mom and I did not bake together and there was certainly no cupcake, icing or sprinkles to play with. I sometimes think of how sad it is that she is slowly losing who she is and was and then there are days like yesterday that make me smile. 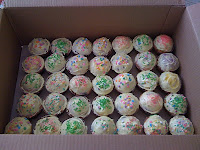 she may not be able to do all the things she used to do like cleaning, cooking, being independent and running here there and everywhere while the rest of us were exhausted watching her. I guess moments like this I realize that she had it in her this whole time. the ability to let go and be more relaxed and be silly and lick her fingers and make a mess. either that or she is oblivious to the whole thing. who knows! 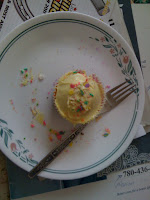 regardless I know that it was a pretty special day and I had to pinch myself to see if I was really living it. 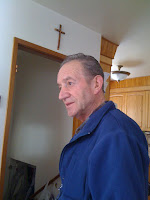 and when I asked dad if we should go into the cupcake business? well, more swearing, but I know he had fun too cause he hung around and helped out.
Posted by nadia at 10.3.11

haha, that is so funny, and touching at the same time.
will you teach me some italian swear words? just so i can use them in our emails...
FrancieFancyPants

this is so precious. thank you for sharing! i am so happy that you were able to have this special day with your parents.

that was so fabulous! so great to have these wonderful memories. So happy for you:)
Kisses and hugs!