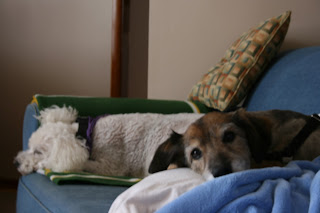 max & sparky march 2009
since we lost max I have often wondered if sparky was lonely and missed him. I know I did so I was pretty sure sparky was in the same boat. oh he had his share of play dates and puppy daycare. all were met with excitement and exhaustion. you remember sparky? he is pretty much a piece of furniture. not much excitement, never has been. he pretty much waddles around the house and occasionally wags his tail. there are those odd times when he perks right up and we are convinced he went into mamma's medicine cabinet again. and so I decided to start a little experimenting.
exhibit a - sparky a la solo:

appears to be searching for a friend.
exhibit b - sparky and his new friend "bunny": 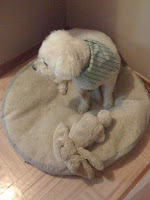 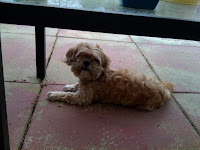 as you can see sparky opted out of the photo and pete was "just visiting anyway.
exhibit d - "joey" aka sparky's new brother: 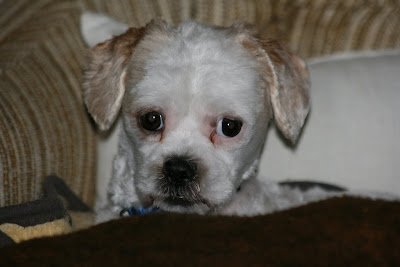 an 8 month old shitzu bichon whom we rescued.
who thinks sparky is a big white foot stool, but gives him the occasional kiss. sparky is intrigued by joey and follows him around which in my eyes means we are on to something. so far the two of them have been getting along fine. no tight bond, but no fights either. I love that sparky is curious about what joey is doing and he is wanting to show off for him more and more. I pulled out the treat ball last night and sparky chased it around the living room while joey tried to figure out what all the fuss was about...and then the treat fell out. fun!
Posted by nadia at 7.7.09

My kids WANT to dogsit for you VERY much now!

How fun! I hope the new family addition works out well. And I was so happy to read about your mom painting. How cool is that!