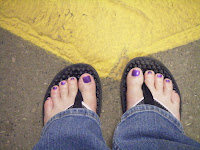 I had a wonderfully relaxing extremely thorough pedicure. apparently my pedi's were mucho neglected and with the amount of use my feet go through it was quite the task! it's all good and mom's super pedicure girl was so fabulous I asked her to get rid of the caterpillar on my lip. I have never had that done before and so "ouch". I figured why not go for broke and get the eyebrows down - double "ouch". so I am feeling "pretty" at this point, but ann wants to go all emeril on me and kick it up a notch.
I oblige because I have been SO far from feeling pretty or taking care of myself that anyone who wants to spruce me up can have it er! I am so weak! she extends my eyebrows because apparently they are short. great! new material for the next therapy session! then she asks if I wear make up. I am I say. mascara, eyeliner and burt's bees. poor thing! I had to pick her up off the floor. so she proceeds to add some detail to my eyes with eye shadow. you have some brown eye shadow at home don't you nadia? uh, nope. okay, so onto a little lip color with spf which is important. I confess that I never wear sunscreen. there I said it here too! yup! to which she replies, well that is why you have those tiny red veins in your face. either from the sun or wind as you spend a lot of time outdoors.
at this point I am like - come again sister? you mean to tell me that after all these years of trying to make daily outdoor activity a habit in order to stay healthy. and finally making it a priority that now I am ruining my skin? wtf? I let her apply the lip liner and ask her where I would wear all this make up. she tells me "for when you go out". to which I reply "out where?" she says "10% tuesday". okay now your making fun of me! 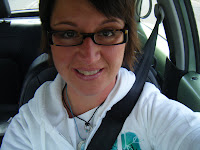 oooohhhh! pretty girl! all this in light of the conversation that I had with myself before the appointment. it went along the lines of how I really wish people would stop putting value on others by their appearances only. for example if she is pretty she must be dumb. if she is smart she must be ugly. if he is homeless he must be a loser. if she is overweight she must be lazy. if he drives a nice car he must be rich and so on. see I kinda forgot that dan had a beard the other day. it just isn't something I sit and stare at when I am talking to him. I pretty much focus on what he is saying. but people judge. we all do. and some people feel prettier when they have make up on and I? I am all for just making it through one more day without anybody getting hurt. how's that for a goal!
in other news... 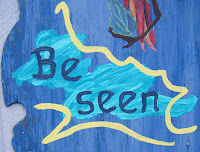 I have this amazing photographer friend and every time I am with her she is snapping photos at all sorts of stuff. she doesn't carry lug around her oh so fancy camera everywhere, but she does always seem to have some sort of moment capturing tool. she has inspired me to notice things I might otherwise miss. the sign above for example that popped out on our way to mom's neurologist appointment. I stopped and whipped out my camera and snapped a quick pic while mamma was cruising down the avenue.
she was AWESOME! picked her up at the hospital and she walked to the car and got in without any trouble. so scared that as I am writing with all this excitement that something will go wrong. she was very patient with the doctor who asked tons of questions and made her do lots of different things to see if she did indeed have parkinsons. from what he found he says no although he would like to see her at the end of the year and off her medication to see if there is any difference. yay! she is back at the hospital working hard and apparently last night took a break to watch the hockey final. so cute!
gotta run. ciao! make up to put on before heading out to meet my peeps for a walk. NOT!
Posted by nadia at 10.6.09

I love your pretty toes, I really like the BE SEEN and the OH NO from yesterday and I am SO happy that your Mama is improving - you are so strong and wonderful