an afternoon with papa... 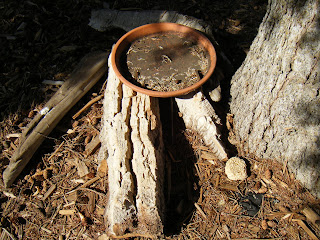 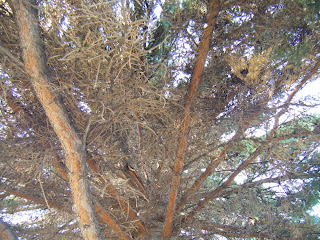 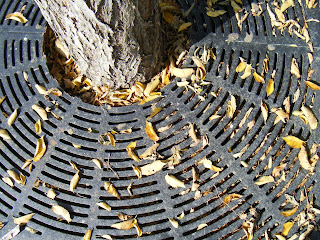 yesterday after we dropped mom off for her massage dad and I went reminiscing through the old neighborhood. we drove around until we came to the front of our old house. I jumped out and started snapping pictures. I started to remember the inside and I wanted to go in and see if it had changed. of course it probably has!

dad was telling me stories about how he planted that tree in the front that now covers the view of the house. "stupid place to plant a tree" he said. "look at how big it is!" "dad, that was 39 years ago!" we looked around at the neighbors and pointed to houses and remembered names.

the first and second pic are from the tree in front of the very first house I ever lived in.

the last one is a pic from in front of the massage clinic. 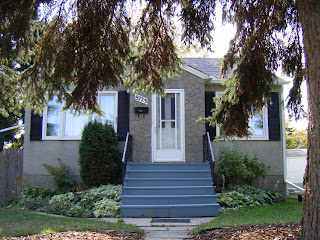 and here is "my first childhood home". isn't she cute? don't the steps look inviting? I like to imagine who lives there now. I would like to think that it is a young family with a little girl. deja vu! I like to imagine that this is their "first" home and that they too have big dreams just like my mom and dad did way back then. 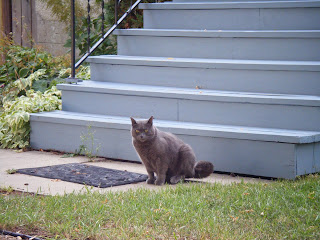 while I was having my own little "past party" I noticed this little guy. even though the welcome mat is next to him, he did not seem to be too welcoming! LOL! he has that look on his face like "hey, who the hell are you?"
or maybe, just maybe he is thinking "hey, aren't you that little girl that lived here before?" cats have nine lives don't they?
we were driving around the block and came upon a yard sale. dad wanted to go check it out and hey I am always up for a bargin! he found an item for $1.00. he reached into his pockets and had no money! too funny! I gave the lady a $1.00 and said "expensive shopping companion!" she laughed and then asked my dad if he used to live around here. he said, maybe. she then said her name and said "you are peter, aren't you?" turns out that she is the daughter of a couple who mom and dad and I used to spend time with. we would travel to their cottage at the lake and kick back. dad made them some adirondack chairs and fixed up the kitchen cupboards and a few other odds and ends. she turned to me and said "and are you nadia?" "yes" I replied "and forgive me if I seem stunned, but I was just asking dad about your mom the other day". freak my freak! her dad has recently passed on and her mom who was inside napping is now 91 years old. a fun trip down memory lane.
as we were driving down the alley we came upon this display: 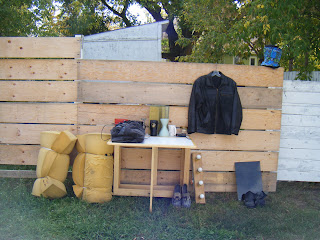 we couldn't figure it out. in the middle of the alley a little table set up with assorted items on top. other things surrounded the table. hat, shoes, foam and a leather jacket hanging from the fence. was it free for the taking? was it part of some game that someone had set up? was it a trap? HA!
Posted by nadia at 20.9.08

omg I love the pictures and totally love the last shot of the weird give away art installation !