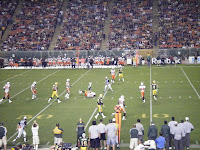 oh sure there were footballs being tossed at my face at every touch down. I was almost taken out by the man beside us as he tried to grab the ball sitting at my feet. I was focused on not getting hit in the face! my friend who was sitting in front of me turned around and grabbed it. woo hoo! a mini football! throw some art supplies and then we're talking!

there was also the added feature of pyrotechnics after each touchdown with a sprinkling of streamers. had I know this I would have had the camera ready... 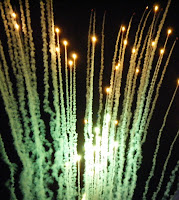 that is one shot...here is another of the streamers... 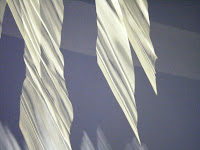 there were the cheerleaders who were fun to watch and the mascots. a whole bunch of running around, smacking into each other all to get the ball across the line and do a little dance. kewl....

now if only we could get grown men to do this everytime they completed a task. say the underwear hits the hamper...do a little dance! garbage makes it to the back lane....dance baby! obviously we would skip the tights....so overdone!

my highlight of the night was finding cotton candy! woo hoo! the one and only thing besides water that was available for safe consumption. and the bus ride? not so much.

off to book my trip to ny to see my bon bon. thanks linda!

have a great weekend and hey! birthday week begins!
Posted by nadia at 1.8.08

happy birthday week!!!!!!!!!!
I feel similar about the ball of feet game - really like the pictures though, great fireworks shot.